Since his dawn, man has sought to evade the reality around him, with the sole purpose of living new experiences that were beyond his reach. Reading a book, listening to a story or watching a good movie are but different examples of this evasion, they transport us to another reality providing us fun, leisure and satisfaction throughout the journey.

This is the foundation that holds giant industries such as television, cinema, video games, the publishing and audiovisual industry overall. Therefore, the making of new forms of evasion and entertainment, with certain acceptance in society, can generate a large economic impact in the industry, particularly in the above mentioned.

Reality is perceived as the result of the brain’s interpretation of the stimuli received from the external world through the senses. This process, like any other cognitive process, is influenced by the experiences and capabilities of each individual.

Thus, the perception of reality depends on the following:

The alteration of any of those elements inevitably produces an alteration in reality. 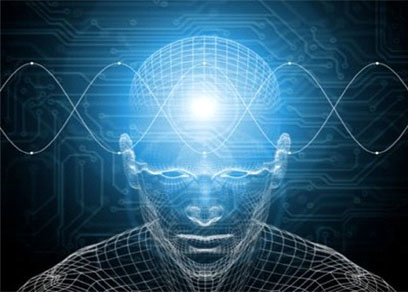 Human being has always dreamed of living in an alternate reality.

It is possible to alter reality and, thus, create artificial realities. As a matter of fact, our brain does it on a daily bases, when we dream. This is made possible by the following procedures:

The first procedure is hardly controllable nowadays, since the knowledge of the brain’s processing system is not sufficiently advanced. On the other hand, the effectiveness of the second one depends directly on the channels used to transmit the mentioned stimuli, often being compensated by the user’s imagination.

This last approach is used by the majority of entertainment channels that we know today and of course, by virtual reality.

Virtual reality is a technological system that aims to produce a perception of reality, which is artificially synthesized by the usage of computers and other devices, that allows a user to have the feeling of being present in it..

The main advantages of this system compared to more traditional ones are:

Virtual reality’s history is extensively documented and is as vast as the history of computing and the dream of living new experiences. However, the concepts that we know nowadays became popular in the mid-80s, partly thanks to the work of the visionary scientist Jaron Lanier, to the pioneer devices developed by his company VPL Research and the success of some literary work and science-fiction movies from that decade. 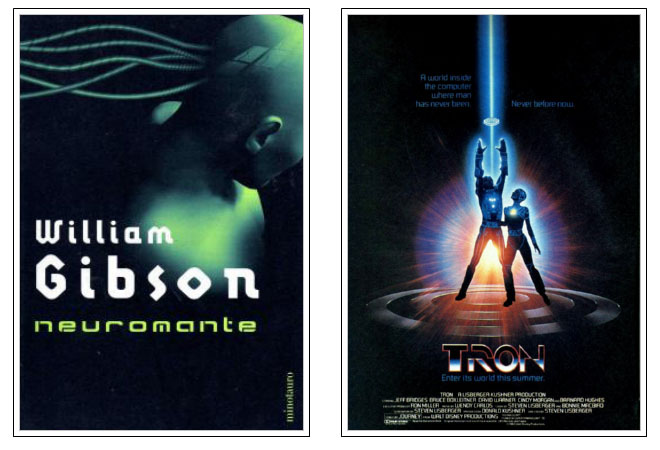 Covers from ‘Neuromancer’ (book) and ‘Tron’ (movie), milestones in history and in the popularization of virtual reality.

The operating mode is as follows:

Therefore, one can conclude that the degree of realism and immersion that a virtual reality system offers, is directly dependent on the capabilities and technological level of the equipment used to generate, manage, transmit and interact with the alternate reality.

Apart from one or more computers, which are used to manage the scene and the system in general, certain specialized devices to transmit and interact with the new reality are required.

It is the most important device of the system. It has two purposes:

The device includes two separate screens through which the scene is transmitted stereoscopically. The computer sends an image with a slight offset to each eye synchronously, thus creating a practically perfect three-dimensional impression.

The evolution of these devices in recent years has been remarkable in every respect, both in quality, accuracy and resolution of the displays, as well as comfort, weight and cost of the devices.

Comparative images of the different models of virtual reality glasses: To the left the model included in Virtuality’s system, which was very popular throught the 90′s. To the right, model Vuzix Wrap VR, launched august 2011. The latter includes two 852×480 point screen, a high-precision head-tracker and stero sound system.

In addition to the virtual reality glasses often a device that collects the position and orientation of the user’s head is used. This way, the computer can synchronously update the scene with the movement of the user’s head.

Although these devices are often integrated in the glasses, they can be acquired independently if high accuracy is required. 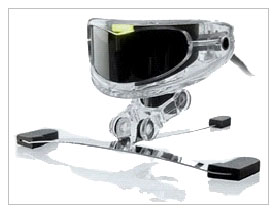 Alternatively and to reduce costs, these devices can be replaced by a webcam with real image recognition software

Devices for interaction with the alternate reality.

Due to the user’s isolation from reality in virtual reality systems, the usual human-computer interaction devices, such as they keyboard or the mouse, are not valid in these systems. To fill this gap interaction devices with alternate reality have been developed over time, with more or less success. Such devices are usually oriented to capture the position and orientation of different body parts, through which the user interacts with the system.

Much of the real world we do, we do with hands and fingers. This is the conceptual basis of this device, the most famous and popular for interaction with a virtual reality system. It consists of a glove that captures the position and orientation of the hand and fingers and translates the data to the computer. This way, the individual is able to pick up and manipulate objects in the virtual world and therefore make interaction in the most natural way possible.

Just as with the other devices, the technological evolution of these types of gadgets over the years has been remarkable in many ways. Some of the most advanced models even include feedback systems, so that the user can feel the virtual objects by touch.

On the left, data-globe included in Virtuality’s system. On the right, the model CyberGlobe from CyberGlobe II Systems, far more modern, comfortable and accurate. It’s frequently used in industrial systems.

Although it seems like the most natural and accurate to interact with the alternate reality, the system is intrusive, not too comfortable and definitely not consolidated in the market.

Undoubtedly, the optimal and most natural way to interact with the virtual world is through the entire body, not just through the hands. With this in mind, numerous devices have been developed over time from full suits to tracking systems with cameras and sensors of various kinds. However, until recently, these devices were extremely intrusive and not comfortable at all for continuous use and only had capacity in certain professional fields. 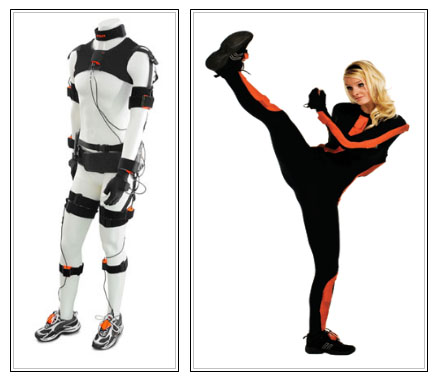 Various body tracking systems. On the left the motion capturing suit MVN BIOMECH, on the right, model MVN, both from XSens.

This trend has changed drastically in the last year, thanks to a new technology developed by Prime Sense. This company, of Israeli origin, specialized in natural human-machine interaction, offers a body-tracking device that is not intrusive, accurate and affordable.

The operating mode of the system is as follows: 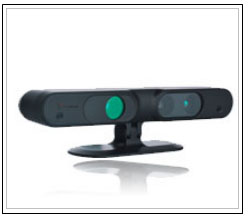 Prime Sense’s capture device. On the same device various sensors (IR and CMOS) and the specialized chips that process information captured in real time are included. 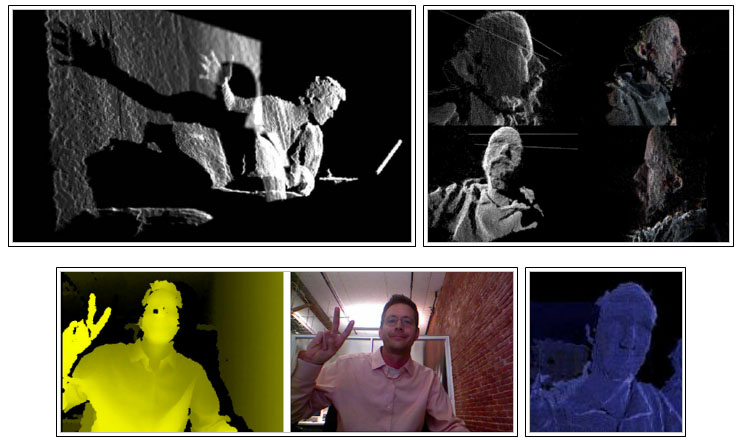 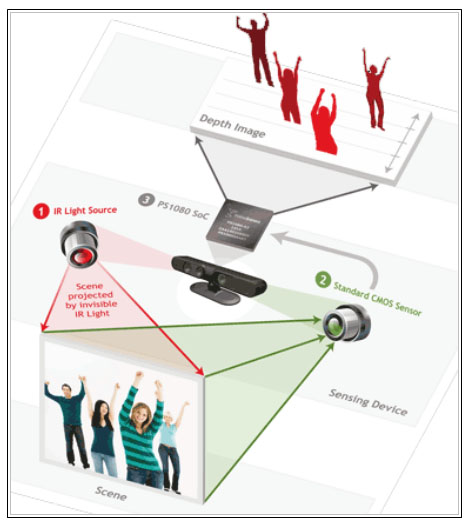 The result is spectacular: it works really well, it’s accurate, it does not require installation of any uncomfortable device on the body and it’s affordable. 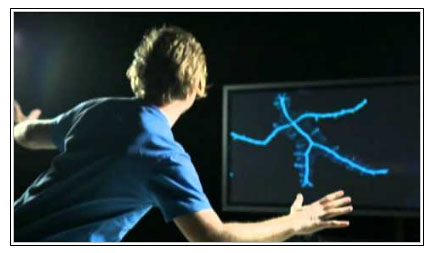 Representation of three-dimensional skeleton obtained by the system.

This system has become really popular over the last year as it has been licensed and marketed successfully by Microsoft for their video game console, Xbox 360, it was initially known as Project Natal and finally as Kinect. 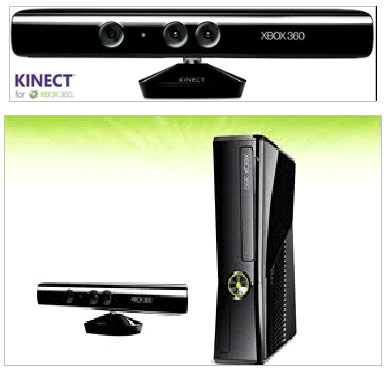 Although its use and design are not oriented towards virtual reality, the market is full of devices that can be used as a tracker and therefore as interaction devices with the alternate reality. Examples of these devices are:

An effective system of virtual reality requires a lot of processing power to run the control algorithms, visual generation and interaction with the alternate reality. Specifically in the field of vision, it must be capable of representing complex scenes with high level of realism, having to maintain a more than acceptable rate of frames per second, with the addition that each frame must generate two different images, one for each eye.

Este hecho, que años atrás si era un verdadero problema, no lo es en la actualidad. The power offered by mid-range processors on the market is more than enough to manage the system in general. On the other hand, specialized graphics processors fully relieve the main CPU from heavy processes, generating the three-dimensional scene and allowing a fine level of realism and complexity, at a very low cost.

On the left visual system from video game ‘Hunter’ by Activision, from the 90′s. On the right, the visual system ‘Unreal Engine’, used nowadays. The differences in quality and realism are but remarkable between these real-time systems.

In this respect it is worthy to note that the development and most important advances in this direction are strongly linked to the world of video game and entertainment in general.

The concept of virtual reality has been many years in gestation, waiting for the right technology for mass popularization and implementation. After years of experimental developments, passion and enthusiasm from their researchers and followers, spectacular successes and spectacular failures, it’s time has come.

Today’s technology allows this, since:

And all this at a very low cost, if they are mass produced, as in the case of Microsoft Kinect.

These facts, along with the popularization of the Internet and social networks, whose link with virtual reality can give a new, revolutionary and explosive focus on the concept of virtual relationships and leisure in general, are just a few touches of bright future provided by this technology.

Big technology brands have realized this and the facts bear this out. Nintendo led the way with its successful Wii console, Microsoft followed with its revolutionary Kinect and soon, Sony will present a model of virtual reality glasses for PlayStation 3. This latest release will certainly be a milestone in the spread of virtual reality and become a turning point in the advancement and evolution of forms of digital entertainment. 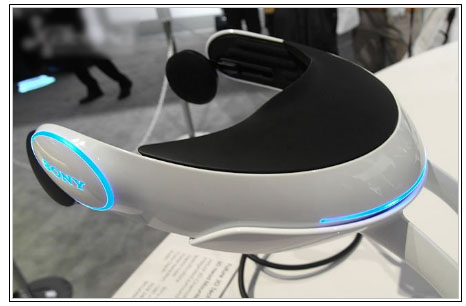 In conclusion, in the present, the union of a midrange PC, Vuzix Wrap 1200 VR glasses, a Kinect device and an Internet connection offers some truly amazing possibilities in all aspects, at a very low cost. This is surely something that is worth looking into; to invest, develop and spread to the rest of the community.

In the future, only imagination will put limits to this technology.

Next: The project basis